One does not need to travel far along the road of Christianity to find oneself faced with the idea of “mystery.” The word shows up often in the New Testament, especially in St. Paul’s letters, and it is used constantly in the tradition. Paul calls the whole of the Christian faith a mystery (Romans 6:25; Ephesians 1:9; Colossians 1: 26), and he also speaks of specific aspects of the faith as mysterious: the change in our nature that will take place at Christ’s second coming (1 Corinthians 15:51); the rejection of Christ by the Jews (Romans 11:25); the participation of the Gentiles as coheirs in Christ (Ephesians 3:3); the nature of Christian marriage as a participation in the relationship of Christ and the Church (Ephesians 5:22); the gift of the Holy Spirit (Colossians 1:22); and the workings of evil (2 Thessalonians 2:7). The Church has always referred to the sacraments, especially the Eucharistic liturgy, as the ‘Sacred Mysteries.’ The Church also regularly speaks of the mystery of the Trinity and of the mystery of the Incarnation. The most widespread devotion in the Catholic Church, the Rosary, identifies twenty mysteries, events from the life of Christ. It seems that Christians are surrounded by mysteries on every side. For the modern seeker or believer, this can present a problem.

The problem stems mainly from the common meaning of the word ‘mystery’ in modern English. Usually we mean by it one of two things. Most often we think of a mystery as something that we do not now understand, and that on the face of it looks perplexing and difficult but is ultimately explainable. This use of the word can be seen in the literary and entertainment genre of the murder mystery. A dreadful crime has taken place, and the thing seems impossible to unravel. Then along comes a Sherlock Holmes, a Hercule Poirot, or a Jane Tennison, and the mystery is “solved.” What seemed before to be inexplicable becomes plainly understood once all the facts are discovered and placed in proper order. The same use of the word is behind the often-heard phrase, the “mysteries of science.” There is much about the natural world that we do not know, but we have confidence that if once we could gather the right kind of evidence and find the right kinds of connections, those mysteries might be solved: after all, much that was once mysterious in the scientific realm is now clear to us. A second, more colloquial use of the word ‘mystery’ comes into play to describe something we cannot figure out and that maybe has no explanation, and that probably is not worth the effort to try to understand. Someone may say: “Why is that person always so difficult to deal with?” The response comes with a roll of the eye and a shrug of the shoulders: “I don’t know; it’s a mystery.”

When either of these meanings of mystery is applied to the Christian faith, we get into trouble. It might seem as though Christianity attaches the term ‘mystery’ to whatever aspect of its account of reality does not seem to square up, like a CPA who excuses his inability to give an accurate rendering of his funds by claiming that “numbers are a mysterious business.” Pre-modern doctors were not acquainted with the existence of germs, and found many diseases “mysterious,” but with our greater knowledge, we have left behind the practice of bleeding our patients with leeches or ascribing their diseases to the phases of the planets. Does not the prevalence of so much mystery in Christianity express either an outworn explanation of things that we now understand much better, or even a somewhat flimsy attempt to cover up the holes of our account of reality by slapping a “mystery patch” on whatever seems to be tearing apart?

The answer is “no.” This is to misunderstand what the word ‘mystery’ means as used by Christians. When its proper meaning is understood, we will see that not only is it legitimate that Christianity should be characterized by mystery, but that it is logically necessary; in fact, the absence of mystery would prove that Christianity was a false understanding of things.

Great indeed, we confess, is the mystery of our religion.

What then is a mystery as the word is used by Christians? A mystery in the Christian sense is not something that we do not happen to know; instead, it is something that we cannot know by the very nature of things. This idea comes into play as soon as the Christian understanding of God is embraced. Christians hold that God is the unique self-existing Being, the One who has created all that is and who is infinite in knowledge, in power, in wisdom, and in love. We know that we humans are not infinite but instead are limited beings, with limited powers of understanding and limited parameters of existence. If a being such as God exists, while there may be much that we can learn and understand about him, there will be much more that will be simply beyond our grasp. It would be merely silly to think that a limited and finite mind could be able to fully encompass the unlimited and infinite. If there were nothing mysterious in our notions of God, and we found that we understood him fully, we could be completely sure of one thing: we have not understood God, we have only created a make-believe God, a creature of our own limited minds. The existence of mystery in the Christian faith is not a sign of its falsity – it is a mark of its authenticity.

The appropriateness of the Christian recognition of mystery becomes clearer when we see where mystery arises in the Christian account of things. Christians do not use the word to describe whatever they do not happen to understand. Christian mystery concerns either the inner being of God himself, as in the mystery of the Trinity, or in the ways that the infinite God interacts with the finite world, as in the mystery of the Incarnation, or of the Eucharist, or of God’s providence in human affairs. Because God’s nature is necessarily beyond our understanding, these are matters that our limited minds cannot fully grasp. How is it that God is both one and three? That Christ is both fully God and fully human? That God knows all things and rules over his creation and yet humans possess free will? That bread and wine become Christ’s body and blood? Christians do not try to explain such things, in the sense of “solving” their mysteriousness. Instead, Christians know that such a solution is impossible. Many heresies have involved attempts to explain away one or another of the Christian mysteries, and the Church has always responded by insisting on maintaining those mysteries in all their seeming difficulty, lest the infinite God be reduced to the limitations of the minds of clever but mistaken finite humans.

The Christian understanding of mystery also makes clear why such mysteries can only be recognized by us if they are first revealed by God, and that once they are revealed they still remain mysterious. The only way we can gain access to an accurate idea of the inner being of God or of his plans for saving the human race is if he tells us about them. Hard and good thinking can get humans a long way and they can get us to the idea of God’s existence and power, but our unaided minds will never arrive at the Trinity. Once a divine mystery is revealed, while we are shown much that we could not otherwise have known, the fundamental mystery, wrapped in divine infinity, remains beyond us.

The encounter with mystery is a crucial moment of truth, and if that encounter is received, it is a moment of wonder and exhilaration. This is the moment for which were created, when the finite comes upon the revelation of the Infinite, when the creature comes face to face with the Creator, when those born into a world of time encounter the One who is timeless, when a lost race is shown the path of life by a divine Savior. That is the moment when the wise person ceases to try to explain, and instead recognizes the limits of human understanding, receives the mystery in reverence, awe, and delight, and worships. 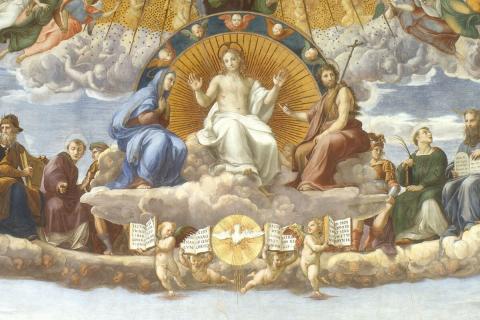 In order to understand the Scriptures, we must recognize their simultaneous human and divine origins: through the Bible we encounter the living Being who inspired its human authors. 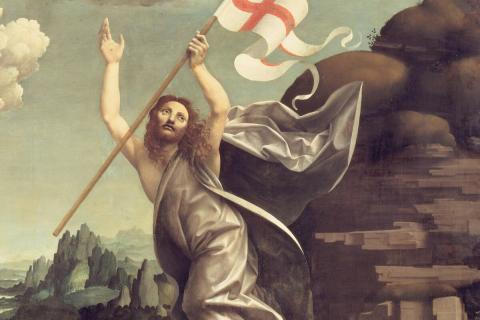 The Case for the Resurrection

As one examines the historical data behind the astonishing claim that Jesus rose from the dead, it becomes clear that the Christian claim of the Resurrection is the simplest explanation.