The first thing God said to the human race through Jesus was a ringing “I love you!” Actions speak louder than words. By sending his own Son among us to free us from sin and death and to bring us back to himself, God spoke as loudly as it is possible to speak. That word of love, Emmanuel, “God with us,” is a source of great joy for us. The truth that God loves us is one of the bedrock foundations of our faith.

The second thing God said to us through Jesus may be a little more puzzling to us. After telling us how much he loves and desires us, he then says to us in no uncertain terms: “Change!” In Mark’s Gospel, this is the first thing that Jesus is recorded as saying: “The time is fulfilled, and the kingdom of God is at hand; repent, and believe in the gospel” (Mark 1:15). John the Baptist had preached the same message before Jesus, and Sts. Peter and Paul will preach the same message after Pentecost.

In shorthand, it looks like this: “God loves you! Now change!”

We might find this a little strange. Does love really work that way? Is it not a hallmark of love that the lover finds a kind of perfection in the beloved? When Sinatra sings his famous tune, “Lovely, never, never change,” or when Billy Joel croons to his beloved, “I love you just the way you are,” are they not touching the core of what it means to love? We all know how difficult it is to be around people whose attitude toward us is “I’ll love you if…” and we find ourselves needing to earn their love and constantly prove that we are somehow worthy of it. “Don’t Change for Me…” sing half of the love songs of the world. How can we say we love someone if we want them to change? Does that not run counter to love? Does God not love us “just the way we are”? Well, yes. And no.

Yes: God loves us with a strength and potency that makes every human love, even the strongest and purest, look like nothing in comparison. He loves us right now, at this instant, in the midst of whatever our sins or imperfections may be. He does not withhold his love from us until we get our act together and set our lives in order. He loves us even if we know nothing about him, and he loves us even when we are turning our backs on him. St. Paul presents this very idea: “While we were yet helpless, at the right time Christ died for the ungodly. Why, one will hardly die for a righteous man – though perhaps for a good man one will dare even to die. But God shows his love for us in that while we were yet sinners Christ died for us” (Romans 5:6-8).

It is precisely God’s terrific love for us that leads to the call to change, to conversion, to metanoia. God does not love us because we are already so good. Instead, he loves us in order to make us good, to bring us back to the goodness that was originally meant for us but that we have lost.

Jesus knows that there is something profoundly wrong with us. He knows that we have a moral disease that is killing us. He wants to heal us of that disease, but he won’t heal us without our willing cooperation. So he calls us to “repent,” to change direction, to willingly put off the diseased ways in which we have been living and embrace his way of life and love.

Genuine love – at least when it involves fallen humans – always desires change in the beloved. Parents love their children and embrace them just as they are. However, their love expresses itself by constantly helping their children to change: to learn to share, to be considerate, to be truthful, to grow into wisdom and maturity. A five-year-old can be charming, but it would be an odd kind of love that wanted a son or daughter to remain as a five-year-old and never grow up. A husband and wife love each other and accept each other in all their imperfections, but if they really love each other they are eager to see their beloved grow in character, wisdom, and spiritual maturity.

What would we think if we went to a medical clinic looking for help in curing a serious disease and the doctor said, “You know, I care a lot about you; I love you just the way you are. So I’m not prescribing any medicine or initiating any treatments. You’re fine just as you are. I wouldn’t think of trying to change you.” We would hardly think that an expression of genuine care. We want our physicians to love us, but we don’t want them to love our diseases.

Jesus is the divine physician who has both the knowledge and the will to cure us. He loves us intensely, but he hates the diseases that are destroying us. He has come among us to set right what is wrong within us. For his love to have its effect, we need to be ready to change. That is why St. Paul writes: “Put off your old nature which belongs to your former manner of life and is corrupt through deceitful lusts, and be renewed in the spirit of your minds, and put on the new nature, created after the likeness of God in true righteousness and holiness” (Ephesians 4:22-24).

The Scriptures give us many beautiful examples of what this repentance, this change, can look like.

Consider the change of heart in Mary Magdalene, who despite her many sins came weeping to Jesus, wetting his feet with her tears and washing them with her hair. Jesus is not naïve about her; he knows her to the core. But because of her change of heart, he says of her, “I tell you, her sins, which are many, are forgiven, for she loved much.” He then says to her, “Your faith has saved you; go in peace” (Luke 7:36-50). Mary Magdalene will go on to be a companion of the mother of Jesus, to stand with Mary at the foot of the cross, and to be given the great privilege of being the first to see Jesus risen from the dead.

Consider the change of heart in Peter, who came face to face with God’s presence when Jesus performed a miracle by the Sea of Galilee. Peter admired Jesus, but he was overcome by his own sinfulness: “He fell down at Jesus’ knees, saying ‘Depart from me, for I am a sinful man, O Lord.’” But Jesus did not depart from Peter. Instead, he called him closer to himself, and gave him the task of “fishing for men,” eventually setting him in a very high place in his plan for humanity (Luke 5:6-11).

Consider the change of heart in the Samaritan woman at the well. She had been living an eventful life: she had already gone through five husbands, and she was now living with a man who is not her husband. Despite her checkered past, she had a seeking heart. Jesus looks past appearances and sees her truly. He opens his heart to hers and reveals to her that he is the Messiah for whom she has longed. She repents, changes direction, and because of her witness, many of her fellow Samaritans come to believe in Jesus.

Consider the change of heart in Zacchaeus. Zacchaeus was a tax collector, which is to say a traitor to his own people and a person whose greed made him wealthy at the expense of his fellow Jews. Upon meeting Jesus, he turns his life around. He “comes down” out of the high tree he had climbed. He learns humility, renounces his greed, and promises to repay anyone he has defrauded. Jesus then goes to eat with Zacchaeus, a way of showing that he was coming to live with him. Jesus says to him, “Today salvation has come to this house… for the Son of Man came to seek and to save the lost” (Luke 19:1-10).

Consider the change of heart in the “good thief” crucified next to Jesus. In an act of amazing faith, this criminal was able to see that Jesus was the king of all humanity at the very moment when Jesus was most at the mercy of the devil’s power and looked like anything but a king. His seeking heart encounters the divine Son of God in the bloody and dying man next to him. He makes the inner turn of repentance and says to Jesus, “Remember me when you come in your kingly power.” In response, Jesus makes a tremendous promise to him: “Truly I say to you, today you will be with me in Paradise” (Luke 23:39-43).

Finally, consider the change of heart in the great Apostle Paul. Paul had been “breathing threats and murder against the disciples of the Lord” (Acts 9:1), hunting them down and throwing them into prison. But Jesus turned the tables on Paul, and the hunter became the one hunted. Jesus throws Paul to the ground and appears to him. Paul is given the grace to repent. He spends days in fasting and prayer and is then baptized by Ananias. He goes on to become the greatest of the missionaries and a writer of the sacred Scriptures.

In each of these cases, Jesus was not looking for perfection in those who were to be his disciples, but rather was looking for hearts that were seeking him, whether they realized it or not, and who were ready to change. As Jesus said to the Pharisees, “Those who are well have no need of a physician, but those who are sick; I came not to call the righteous, but sinners" (Mark 2:17).

More in The Search for God 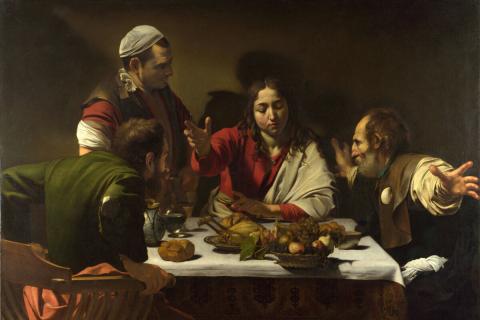 The Fascinating and Fateful Encounter with Jesus

John's Gospel shows us the central elements of becoming a disciple: the importance of witness, a seeking heart, and the attractive potency of the personality of Jesus.

The Decision to Become a Disciple

All in The Search for God