Christ is the Savior of the world and of each individual person who is found to belong to him. It is therefore obviously important for us to know in what our salvation consists. One sometimes comes across the issue at the hands of evangelists of a particular branch of Christianity: “Are you saved?” Sometimes it comes in the form of the question, “Have you been born again?” The typical answer from a Catholic believer is something like: “Well, I guess so… I’m not sure.” The language is unfamiliar and sometimes unsettling. It can be uncomfortable (not in a social sense, but in a deeper religious sense) to think that there may be something in the Christian faith, some important dimension or experience, on which one is missing out. Are Catholics saved? Have they been born again? Are these even the right questions?

It is good to note that these concerns arise right out of the Sacred Scriptures. The notion of being born again comes from Jesus’ words to Nicodemus: “Truly I say to you, unless one is born anew, he cannot see the kingdom of God” (John 3:3). As for being saved, among many Scriptural passages that deal with the question, St. Paul says in his letter to the Romans, “If you confess with your lips that Jesus is Lord, and believe in your heart that God raised him from the dead, you will be saved” (Romans 10:9).

Some Christians hold to the idea, mistaken if sincere, that “being saved” refers to a particular emotional or devotional experience, one to which you can point as a specific moment in which you decided to have faith in Jesus. If you have experienced such a moment, you are saved; if not, you are not. According to this mentality, the question “Are you saved?” has a simple “yes” or “no” answer. Such Christians sometimes have the further idea that if once you have had the experience, once you have been saved, your salvation is guaranteed no matter what you might later do or believe. This is sometimes referred to as “once saved, always saved.”

Despite the scriptural texts mentioned, these ideas are not biblical – or rather, they are not the whole biblical picture. A fundamental principle of the interpretation of Scripture is that we can only understand God’s Word if we look at the whole of it. The problem here, as so often happens, is that a few texts of the Bible are being looked at, while many of others are being set aside.

And when Jesus heard it, he said to them, 'Those who are well have no need of a physician, but those who are sick; I came not to call the righteous, but sinners.'

The picture of salvation that we are given in the New Testament has many dimensions, and each needs to be seen in light of all the others. For example, at one point Jesus says “Whoever believes and is baptized will be saved; but whoever does not believe will be condemned” (Mark 16:16). Jesus here identifies faith as necessary for salvation, as St. Paul did in the above passage from Romans. But baptism is also mentioned as a qualification for salvation. At another point Jesus says: “Unless you eat the flesh of the son of man and drink of his blood, you have no life within you” (John 6:53). This would point to reception of the Eucharist as necessary for salvation. In St. John’s prophetic vision given in the book of Revelation, Jesus says to a particular group of Christians: “Because you were lukewarm, and neither cold nor hot, I will spew you out of my mouth” (Revelation 3:16). Here one sees that zeal for the kingdom is necessary in order to be saved. St. Paul writes to the Corinthians: “Do not be deceived; neither the immoral, nor idolaters, nor adulterers, nor homosexuals, nor thieves, nor the greedy, nor drunkards, nor revilers, nor robbers will inherit the kingdom of God” (1 Corinthians 6:9). Paul here indicates the importance of upright behavior for attaining salvation. In describing the Day of Judgment, Jesus once spoke of those who would inherit the kingdom as the ones who had performed acts of mercy and kindness to the least of his brethren, while those who had not would be sent into eternal punishment (Matt 25:31-46). This would point to works of mercy as necessary for salvation. In the parable of the wise and foolish virgins we are given the admonition to watch for the coming of Christ. The foolish virgins were unprepared, and so missed Christ’s coming, and the door was closed to them (Matt 25:1-13). Here, watching for Christ is shown as necessary for salvation. In another place Jesus says that those who endure to the end will be saved (Matt 10:22). This speaks of the need for perseverance amid persecution in order to attain salvation. Each of these passages, and others like them, might be taken on their own as the one thing necessary for salvation; but they are not meant to be taken on their own. Jesus was apparently unwilling to allow a matter of such supreme importance to rest on a simple slogan or a mechanical equation.

The Great Tradition attempts to bring the whole of the revelation of Christ to bear on the question of salvation. It sees our personal salvation as intimately wrapped up in our membership in the renewed human race, the Body of Christ, the Church. Are we born again? Yes, but we do not associate this with a particular religious experience (though we might well have had such an experience). Our new birth came when we were baptized and divine life was born within us, and it is sustained by continued reception of the Sacraments. In pursuing the way of holiness, we nurture that divine life and allow it to grow. Are we saved? If we are to stay true to the Scriptures, we will not say so. We have good hope of salvation, since we know that it is our Father’s good pleasure to give us the Kingdom (Matt 12:32), but we know our weakness and we know that we could fall and lose what faith and baptism have gained us. Even St. Paul refused to judge his state, and he wrote, “I pommel my body and subdue it, lest after preaching to others I myself should be disqualified” (1 Corinthians 9:27). 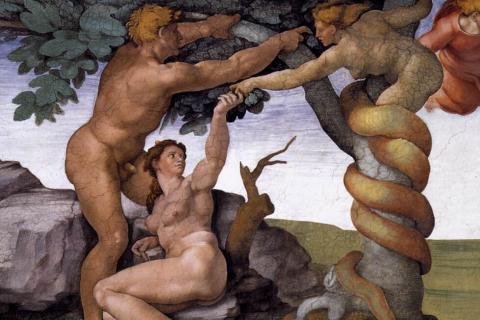 The Significance of the Bad News

Does the evil we so constantly experience arise because of a deep moral flaw within each individual person, or does it come upon us from a source outside of us?