“The kingdom of heaven may be compared to a man who sowed good seed in his field; but while men were sleeping, his enemy came and sowed weeds among the wheat, and went away. So when the plants came up and bore grain, then the weeds appeared also. And the servants of the householder came and said to him, ‘Sir, did you not sow good seed in your field? How then has it weeds?’ He said to them, ‘An enemy has done this.’ The servants said to him, ‘Then do you want us to go and gather them?’ But he said, ‘No; lest in gathering the weeds you root up the wheat along with them. Let both grow together until the harvest; and at harvest time I will tell the reapers, Gather the weeds first and bind them in bundles to be burned, but gather the wheat into my barn’” (Matthew 13:24-30).

Our difficulty might be put this way. The understanding of the Church as divine and human given us by the New Testament and held through all the centuries of Christianity is beautiful, at least in theory. But the theory seems to run aground on the rock of hard experience. When we consider the evident failures of members of the Church, from the flagrant sins of some of its leaders to the less sensational but more common experience of selfishness and worldliness among many of its members, we can see easily enough that the Church has a human side. But where is the divine side? Where is Christ in all this? Can this really be Christ’s body, inhabited by his Holy Spirit, when there is so much sin and weakness among its members?

It is important to remember that this difficulty was anticipated and prepared for by Jesus himself. He went out of his way to make clear that there would be both good and evil within the Church. He did this by way of many of his parables and images: the weeds and the wheat, the good and bad catch of fish, the living and dead branches on the vine, the wise and foolish virgins. He did it by choosing as one of his apostles a man who would wilfully betray him to death. He warned his followers of “wolves in sheep’s clothing,” members of his flock who would seem to be his followers but were in fact his enemies. Every book in the New Testament speaks of the same reality. St. Paul tells the elders of the Church he founded in Ephesus: “I know that after my departure fierce wolves will come in among you, not sparing the flock; and from among your own selves will arise men speaking perverse things, to draw away the disciples after them” (Acts 20:29-30).

What emerges from the teaching of Jesus and the Apostles is a surprising but significant truth: the fiercest battle against the darkness that oppresses humanity will take place not in the Church’s interaction with an unbelieving world, but within the Church itself. Jesus was much more concerned about the false teaching of the Pharisees than about the sinful behavior of prostitutes and tax collectors. Peter, Paul, and John spend a lot more time and energy in alerting Christians about “false brethren,” about the battle within the Church, than about sinful things going on in the wider world. Though this may at first surprise us, it makes sense. The Church is meant to be the instrument through which God saves humanity and defeats darkness and sin. Jesus called his followers the “light of the world” and the “salt of the earth.” The most important battle takes place within the Church: this is where the devil aims all his big guns, trying to put out that light and to make that salt tasteless. As long as the Church is alive and vital, there is hope for the world. If the light goes dark, however, the battle is over. The Church is the epicenter of the battle for humanity by a necessity of its being and its mission.

God did not visit the human race in Christ to fashion a perfect human society – not yet... Instead, God came among us to set up a kind of colony of heaven in the midst of a darkened world, a society of humans still fallen but on the road to their recovery that could act as a light and a leaven for those who were seeking their true home.

In its internal battles, the Church continues along the road paved by Christ. When God became human he healed the wounds of fallen humanity by catching all of humanity’s diseases, triumphing over them from within. He came among us “in the form of sinful flesh” (Romans 8:3). Though himself sinless, he experienced all the consequences of humanity’s Fall: physical vulnerabilities, temptation, and the ultimate and most dreadful consequence of all, death. He then made death a doorway into life by the power of God that was within him. In a similar way, Christ in the Church catches the diseases of humanity, struggles against them, and by the power of the Holy Spirit, triumphs over them. The Church can then bring that life and wisdom to a suffering and diseased world. This has been the way of the Church in every age and in every place where Christ has gathered disciples.

What was true of the man Jesus is also true of Jesus’ body, the Church. Only eyes of faith can see the divine through the misty veil of the human. When Jesus began to teach in his hometown synagogue, his hearers could not get past his evident humanity: “‘Where did this man get all this? What is the wisdom given to him? What mighty works are wrought by his hands! Is not this the carpenter, the son of Mary and brother of James and Joses and Judas and Simon, and are not his sisters here with us?’ And they took offense at him” (Mark 6:2-3). The way God has united himself to humanity has always been a scandal to some.

An eye attentive to the Holy Spirit’s presence will see the signs of Christ’s life all around us: in the mystery of creation, in the unfailing strength and nourishment of the sacraments, in the ever-dying yet always living persistence of the Church’s life, in the quiet but strong voice of God in our consciences and our inner spirits, and in the brightest sign of God’s presence among us, the extraordinary witness of the lives of the saints. 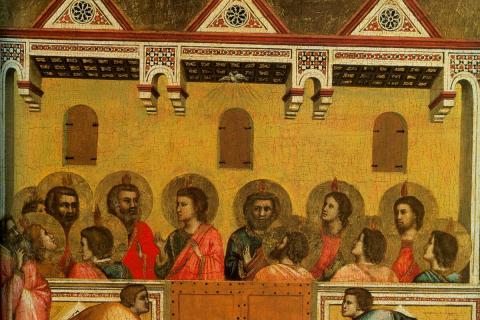 The Uniqueness of the Church

The Church is unique among human institutions and organizations: it is not only a human thing, but like Christ himself is both human and divine, a continuation of the Incarnation. 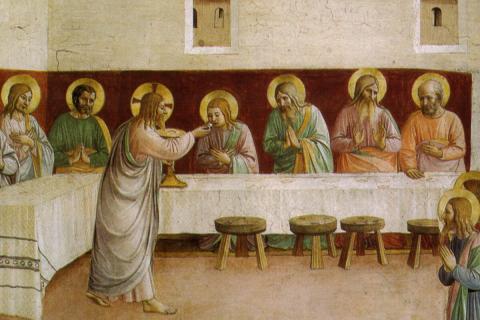 The Holiness of the Church

The Church is the hospital that dispenses the medicines and teaches the protocols that can heal and change wounded, fallen humans, preparing us for the presence of the Holy God.