Leonardo da Vinci (1452-1519) remains one of the most impressive minds of the High Renaissance, having been an achieved artist (including drawing, painting, and sculpting), architect, engineer, inventor, and scientist. Born near the Tuscan town of Vinci, Leonardo spent much of his career in Florence and Milan. In addition to his artwork, he left behind thousands of pages of notes and sketches detailing his research, theories, and inventions. Counted amongst his most notable works is a simple painting of St. John the Baptist, believed by many to have been his last completed painting.

St. John the Baptist marks a transition point in salvation history. Although he was the first prophetic voice amongst the Chosen People in over four centuries, he is considered the last prophet of the Old Testament tradition. At the same time, his story is contained entirely in the Gospels and his ministry overlapped with Christ's ministry.

A relative of Christ (through their mothers, Mary and Elizabeth) and born through miraculous circumstances, John lived an ascetical life in the wilderness, subsisting on locusts and wild honey and clothing himself in rough garments of camel's hair with a leather belt around his waist. Although John preached and baptized in the wilderness, many came from across Judaea to listen to his message as he warned of the consequences of non-repentance. At the core of his preaching was the imminent arrival of the Kingdom of God and one whose baptism would be greater than his own. Upon seeing Christ for the first time, he was moved to utter the famous proclamation, “Behold, the Lamb of God, who takes away the sin of the world!” (John 1:29). His ministry decreased as the ministry of Christ increased, and he fulfilled Isaiah's prophecy of a “voice of one crying in the wilderness: ‘Prepare the way of the Lord, make his paths straight’” (Mark 1:3).

Stylistically, da Vinci's depiction of John the Baptist uses both chiaroscuro and sfumato: chiaroscuro refers to an interplay of shadows and light to bring focus and life to particular aspects of the image, and sfumato refers to a blending of colors and softening of lines to give bring the image slightly out of focus, mimicking the appearance of objects outside of an individual's visual focus. Da Vinci also emphasizes John's youthfulness, rather than the impacts of his harsh ascetical life. This focus would be influential in depictions of John through the following centuries, many of which bear a striking resemblance to da Vinci's work. (Click here to see the full work.)

Calling back to John's prophetic vocation, a youthful John leans forward into the light, emerging from a deep darkness. His hair is long and relatively unkempt, although his beardlessness and unique smile emphasize the fact that he would have been young – around 30 years old – at the peak of his ministry. He is wrapped in rough, fur clothing. A simple reed cross can be discerned in the background, while his right arm cuts across the center of the image pointing upwards, drawing the viewer towards heaven. Through John himself, so often identified with baptism, the viewer is reminded of the necessity of baptism on the path to heaven. 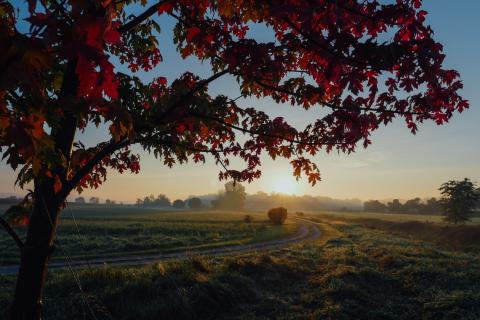 Despite secularity and division, Americans have set aside a day each year to give thanks to God for the blessings of life.

Thank Who?
Found in
Enrichment
Topics
Art and Architecture 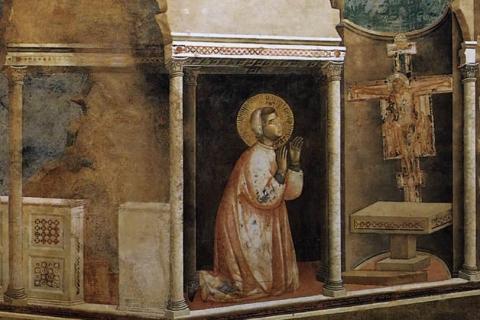 Giotto's "Miracle of the Crucifix"

Learn more about Giotto's "Miracle of the Crucifix" 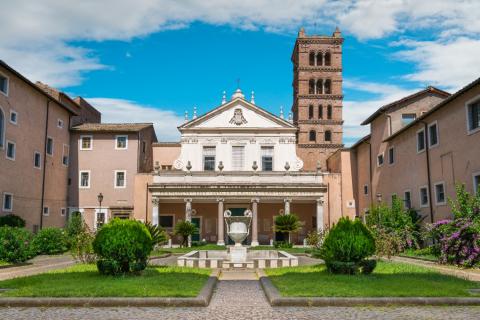 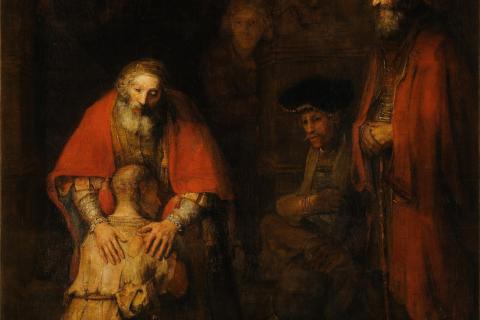 Rembrandt's "The Return of the Prodigal Son"

Learn more about Rembrandt's "The Return of the Prodigal Son"