“The liturgy is the summit toward which the activity of the Church is directed; it is also the font from which all her power flows” (Sacrosanctum Concilium, 10).

For over three thousand years, from the time of Moses to the present day, Sacred Liturgy has been at the very heart of the faith of God’s people. The Scriptures and the long tradition have placed a high importance on proper liturgical practice as an essential aspect of what it means that God’s will “be done on earth as it is in heaven.” Given the great changes that have taken place during the last number of generations and the instability of modern life and culture, it is not surprising that a sense for the importance of liturgy and an understanding of its place and purpose has been waning among Christians. To meet that concern, the Church in recent years has given a lot of attention to the liturgy. What follows are some key principles of liturgy as the Church has understood and practiced it.

1. The liturgy, especially the Eucharist, is the center of the Christian life.

“Taking part in the Eucharistic sacrifice, which is the source and summit of the whole Christian life, they [the faithful] offer the Divine Victim to God, and offer themselves along with it” (Lumen Gentium, 11).

“The liturgy, ‘through which the work of our redemption is accomplished,’ most of all in the divine sacrifice of the Eucharist, is the outstanding means whereby the faithful may express in their lives, and manifest to others, the mystery of Christ and the real nature of the true Church” (Sacrosanctum Concilium, 1).

2. The liturgy unites us with the cosmic order.

“The LORD said to Moses… ‘Let them make me a sanctuary, that I may dwell in their midst. According to all that I show you concerning the pattern of the tabernacle, and of all its furniture, so you shall make it.’ Thus did Moses; according to all that the LORD commanded him, so he did. And in the first month… the tabernacle was erected… So Moses finished the work. Then the cloud covered the tent of meeting, and the glory of the LORD filled the tabernacle” (Exodus 25:8; 40:16, 34).

“[High priests] serve a copy and shadow of the heavenly sanctuary; for when Moses was about to erect the tabernacle, he was instructed by God, saying, ‘See that you make everything according to the pattern which was shown you on the mountain.’ But when Christ appeared as a high priest of the good things that have come, then through the greater and more perfect tabernacle (not made with hands, that is, not of this creation) he entered once for all into the Holy Place, taking not the blood of goats and calves but his own blood, thus securing an eternal redemption” (Hebrews 8:1-5; 10:11).

The divine liturgy is not a human invention; it came from the hand of God himself. First in the revelation of God to Moses on Mt. Sinai concerning the tabernacle, the priesthood, and proper worship, and then fulfilled by Christ at the Last Supper, the liturgy is a participation in the life and worship of heaven. Just as the Sacred Scriptures, inspired by the Holy Spirit, have been encased by believers into beautiful books, adorned with illuminated drawings, set to every kind of music, inscribed on the walls of Churches, and yet have remained a precious and inviolable deposit of faith, so in an analogous way the Church has embroidered and beautified the liturgy with art, architecture and music that have represented the highest expressions of human invention, all the while nurturing and protecting its God-given core down the ages Just as we do not own or control God’s word but are possessed and transformed by it, so we do not own or control the liturgy but are molded and shaped by it according to heaven’s divine order.

3. The principal actor in the Eucharistic celebration is Christ himself.

Christ is at the center of all liturgical celebrations, not only as the one to whom we are praying (that is principally the Father) but also as the one who prays. It is the priest as Christ in persona Christi and the assembled faithful as Christ’s Body who engage the action in the Holy Spirit. No other prayers, essential though they are, so completely belong to Christ and depend upon his action.

4. The whole Church, past and present, on earth and in heaven, is present at every liturgical celebration.

“Those who even now celebrate the liturgy without signs are already in the heavenly liturgy, where celebration is wholly communion and feast… the heavenly powers, all creation, the servants of the old and New Covenants, the new People of God, especially the martyrs ‘slain for the word of God,’ and the all holy Mother of God, the bride of the Lamb, and finally ‘a great multitude which no one could number, from every nation, from all tribes and peoples and tongues…’ It is in this eternal liturgy that the Spirit and the Church enable us to participate whenever we celebrate the mystery of salvation in the sacraments” (Catechism of the Catholic Church, 1136, 1138, 1139).

The liturgy, especially the Eucharist, is the instrument and sacrament of unity, where all members of the Church mystically gather together. This means that the liturgy is never merely a local congregation, or even a regional or ethnic grouping. Church architecture, images in the Church, prayers, and music aim to express this reality that the whole Church, on earth, in heaven, and among every people and nation, are gathered together at prayer.

5. At the liturgy we participate in the sacrifice of Christ, in his resurrection, and in the coming Kingdom: past, present, and future.

“If the Eucharist is the memorial of the Passover of the Lord Jesus, if by our communion at the altar we are filled ‘with every heavenly blessing and grace,’ then the Eucharist is also an anticipation of the heavenly glory” (CCC 1402).

The liturgy unfolds the great drama of human history. In celebrating the liturgy we not only remember the saving deeds of God in the past and his promises for the future, but we are brought to participate in them. We stand again at the foot of the cross, we are brought to the glory of heaven, and we are given food for our pilgrim journey. The liturgy situates us in the story of our lives, without which we go astray and wander into false stories that confuse us and rob us of our identity. Just as all the complexity of human history ultimately revolves around the death, resurrection, and second coming of Christ, so all of human history finds its heart in the Sacred Liturgy, the solemn action that makes those realities present to us day by day and through the cycle of yearly feasts and memorials.

6. The liturgy uses visible signs and symbols to point to and make present invisible realities. The invisible predominates.

“It is of the essence of the Church that she be both human and divine, visible and yet invisibly equipped, eager to act and yet intent on contemplation, present in this world and yet not home it, and she is all these things in such wise that in her the human is directed and subordinated to the divine, the visible likewise to the invisible, action to contemplation, and this present world to that city yet to come, which we seek” (Sacrosanctum Concilium, 1).

The liturgy has an “iconic” quality (from the Greek word for “image”). The essence of an icon, as opposed to other kinds of artistic representation, is that it always points beyond itself to an invisible reality. An icon is often described as a window onto the invisible world. If an icon were to be so beautiful that it gripped the one gazing at it with fascination for its visible form and distracted from the invisible reality behind it, it would fail in its main purpose. So with the liturgy: the art, the music, the personalities, even the dress of those present are meant to be iconic. Whatever in the liturgy that calls attention to itself instead of pointing to a reality beyond itself diminishes the primacy of the invisible.

7. At the liturgical celebration, all who are present are meant to participate actively.

“Mother Church earnestly desires that all the faithful should be led to that full, conscious, and active participation in liturgical celebration which is demanded by the very nature of the liturgy” (Sacrosanctum Concilium, 14).

Participation is a word with profound theological meaning. It is the translation of the Greek scriptural term koinonia and is alternatively translated “communion,” “fellowship,” “sharing,” “partaking,” and “partnership.” When the document quoted above speaks of active participation, it means that there are no spectators at the liturgy. All come as the body of Christ, to pray, to offer themselves as Christ, to re-enact the Paschal sacrifice, and to eat and drink his Body and Blood.  Everyone is attentively being brought into communion with Christ; no one sits watching on the sidelines.

The assembly engages in the liturgy sometimes by singing, sometimes by praying together aloud, sometimes by quiet adoration, sometimes by careful attention to the prayers being said by the priest that they are also praying, sometimes by listening closely to God’s word and responding to it in their hearts, sometimes receiving Christ’s body and blood, whether standing, kneeling, processing, or sitting, in various postures of active prayer.

Those with special roles in the liturgical celebration do so in a way that helps the worshippers avoid the entertainment mentality so prevalent in modern life. The priest is not the emcee of his personal show; the musicians are not performing for an appreciative crowd; the lectors are not doing ventures in dramatic reading. All is done in such a way as to preserve the center of attention on the action of Christ, to aid the worshippers in entering that action, and to avoid distracting them from it.

8. Because of its importance, the liturgy is in the care of the highest authorities in the Church.

“Regulation of the sacred liturgy depends solely on the authority of the Church, that is, on the Apostolic See and, as laws may determine, on the bishop. Therefore no other person, even if he be a priest, may add, remove, or change anything in the liturgy on his own authority” (Sacrosanctum Concilium, 22).

Because the liturgy is an image of heavenly reality and is meant to be formative for the worshipper, it is fitting that those responsible for preserving Christian truth on behalf of the Church would take special care of liturgical practice. The Chair of Peter is primarily an office of unity, and the regulation of the liturgy falls to its province. Everyone who enters the liturgical celebration, whether bishop, priest, deacon, or layperson, makes an act of humility before the truth by honoring the way of worship given us by the Lord and nurtured by the tradition.

9. The Divine Liturgy is a great gift to the faithful, a source of joy and a rock upon which to build a life.

“The Eucharist, as Christ's saving presence in the community of the faithful and its spiritual food, is the most precious possession which the Church can have in her journey through history” (Ecclesia de Eucharistia). 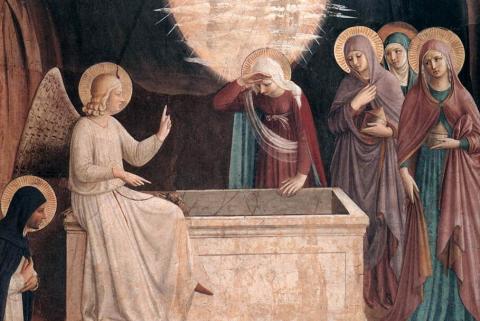 Before the fullness of time when Jesus will establish his Kingdom in the sight of all, he has established a time of mercy, working through his Church to proclaim the Gospel to all nations. 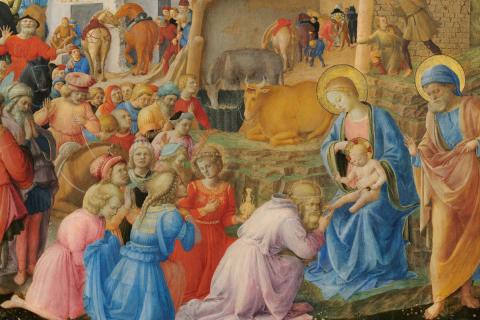 Unless the temporal activity of social life goes forward within a framework of leisure and liturgy, it becomes misshapen. Liturgy conforms the whole of life to the harmonies of heaven.