As Christians think about how best to deal with their duties toward society, they are often urged to pay attention to the Church’s social teaching as a source of fundamental principles for engagement with the wider world. There can often be some confusion about what this phrase – the social teaching of the Church – means, and there can be questions as to why it is important or even appropriate given the fact of our liberal democratic society. This brief article attempts to clear the ground for a greater measure of clarity about what that teaching is and why it is important.

Christianity is essentially a social and communal faith. The duty to love one’s neighbor, one of the two great commandments at the center of the Christian moral vision, is inherently social. Much of the teaching of Jesus concerns how we are to deal with others, how to aid, support, forgive, teach, care for, and respect those with whom we are thrown together in life. Christianity has never been merely a project of personal self-perfection; it has always been the founding of a community, the adventure of a people who share a common identity, about whom Jesus once said: “By this all men will know that you are my disciples, if you have love for one another" (John 13:35). Is the term “social teaching” just another name for the law of charity? And if so, what is distinctive about it beyond the important call to love one’s neighbor?

To get at the answer to that question, it is good to recall the distinction, common in the Christian tradition, between our two main modes for understanding reality: namely reason and revelation. Truths that come through the use of reason are theoretically available to anyone who puts the mind to its proper use. Truths of revelation go beyond what reason can grasp on its own, and deal with things that we can know only because God has shown them to be true. Reason and revelation are not at odds with one another and do not contradict each other. Nonetheless, in thinking about our interaction with the wider society it is important to understand what it is that we can learn from unaided reason and what can only come to us through the special revelation of God.

The Christian scriptures are our main source of what God has revealed to us, and they contain much that we could not have known without that revelation. But the Bible also includes many matters revealed by God that are also available to our reason. For example, many of the commands given by God through Moses concern things we could in theory have known without that revelation. The injunction not to murder, not to steal, and not to witness falsely can be rationally arrived at, and many people and whole cultures that are not Jewish or Christian, and who do not appeal to the Scriptures, have held them to be matters of sound moral reasoning.

Yet God also reveals that these commands are true. He strengthens and supports what reason, used rightly – an important qualification here – might discover on its own. We can see why that might be so. The moral wound that afflicts all of us means that human reason, though given to enable us to arrive at reality, is often not used rightly. Our passions and our selfishness regularly get in the way of rational thinking. Who does not experience this on a daily basis? How often do we run into people or situations where we shake our heads and say, “That person is making no sense.” How often do we catch ourselves concocting ways of looking at things that have little to do with reasoning and everything to do with our self-interest, or our fears, or our ways of dodging the difficulties of life? According to the Aristotelian definition, humans are “rational animals,” but these rational animals often act irrationally. Not only individuals, but whole societies can get lost in false and unreasonable ways of thinking. When God reveals as true certain things that could have been rationally arrived at, he is doing us the favor of putting his divine authority behind realities that we should know but that we often lose grasp of, and he is securing important truths for those who may not have the time, opportunity, or intellectual grasp for the time-consuming task of sorting out a truly rational ordering of the world.

With these ideas in mind, we can go back to the point of the Church’s social teaching. When Christians use this phrase, they mean, not just the commands given by Christ to his followers concerning their relations with others, but especially those rational principles that apply to all people whether in or out of the Church, and that underlie the proper ordering of a just and reasonable society. Christians rightly attempt to see these principles enshrined in the laws and customs of whatever society they belong to, because human societies can only survive and thrive to the degree that they are reasonable; i.e., founded on reality. When irrationality infects a social tradition, the society tends to fragment, conflict grows, and many people suffer as a result. Christians, who wish the best for their neighbors, thus have a serious concern to promote principles of sound reason in the laws and customs of their countries.

What are some of the reasonable things often forgotten by human societies and recalled to our minds by God? A partial list would include such principles as: the fundamental dignity of every person, a dignity derived from the fact of their creation by God; the necessity of justice for a peaceful social order; the understanding of family as the basis of a healthy human culture; a proper concern for the weakest and neediest members of the society; the importance of acting for the common good based on the essentially communal nature of humanity; and an understanding that human dignity involves both the possession of certain social rights and the responsibility for shouldering certain social duties. These principles, and others like them, are supported and given greater clarity by the Christian revelation, but they are the fruits of the right use of human reason.

This brings us to the important question posed earlier, concerning the way the Christian faith can best interact with a democratic society such as ours. Christians should rightly shrink from forcing non-Christians to accept and submit to the revealed doctrines of the faith. We will be glad to witness to those doctrines, to speak of them with joy and conviction, and to invite people to come to know the living God; but we will not attempt to impose them on the unwilling. As an example, Catholics understand that it is a privilege and a holy duty to worship the living God and that God himself has taught us how to worship him. But if a law were proposed obliging everyone in the country to attend weekly Mass, all sensible Catholics would denounce it; it would rightly be seen as a violation of conscience unfitting for a democratic and religiously pluralistic society. On the other hand, there are many matters of social importance that Catholics can speak into for the sake of the society as a whole. In doing so they are not imposing their religion on other people; they are calling people back to what all of us would know if we were reasoning rightly, and helping their society to order itself according to the right use of reason for the sake of all involved. Let’s look at a few examples.

This list could be expanded indefinitely. As Christians, we are involved in many aspects of the social world, in business, in politics, in health care, in education, in all the many things that go to construct the fabric of social life. As we consider how best to benefit and contribute to the world in which we live, the principles of the Church’s social teaching will provide for us a sound guide for the important task of helping our society to order itself according to the dictates of genuine reason, for the sake of the peace and happiness of all the members of the society. It is one of the important ways that Christians obey the command: “Love your neighbor.” 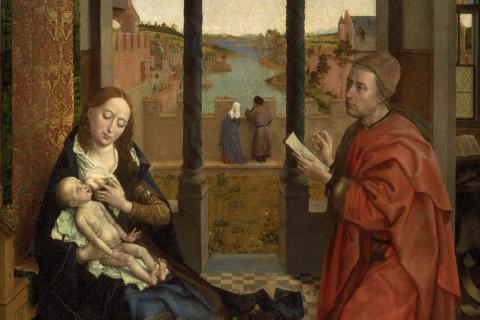 Attitudes and Practices of the Catholic Professor

The Catholic university professor has received a high calling, requiring an attitude of service to truth, service to others, and an apostolic impulse.