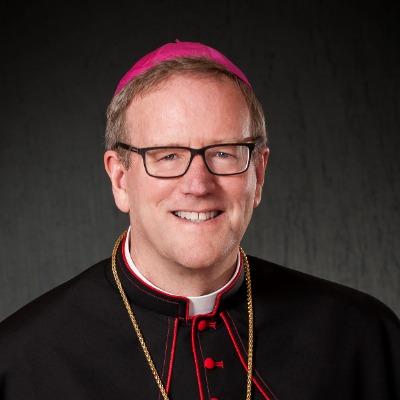 Bishop Robert Barron serves as an auxiliary bishop of the Archdiocese of Los Angeles and is the founder of the global media ministry Word on Fire, which utilizes the tools of new media (including his popular YouTube channel) to reach out to millions of people.

Bishop Barron is a bestselling author and has published numerous books, essays, and articles on theology and the spiritual life. He is a religion correspondent for NBC and has also appeared on FOX News, CNN, and EWTN. Bishop Barron has been invited to speak about religion at the headquarters of Facebook, Google, and Amazon. He has keynoted many conferences and events all over the world, including the World Youth Day in Kraków and the World Meeting of Families in Philadelphia, which marked Pope Francis’ historic visit to the United States.

Bishop Barron received a master's degree in philosophy from the Catholic University of America in 1982 and a doctorate in sacred theology from the Institut Catholique de Paris in 1992.

Bishop Barron was ordained a priest in 1986 for the Archdiocese of Chicago and was appointed to the theological faculty of Mundelein Seminary in 1992. He has also served as a visiting professor at the University of Notre Dame and at the Pontifical University of St. Thomas Aquinas in Rome. He was twice a scholar in residence at the Pontifical North American College at the Vatican.

He served as the Rector/President of Mundelein Seminary/University of St. Mary of the Lake from 2012 until 2015. On July 21, 2015, Pope Francis appointed him to his current role.

Why Equity, Diversity, and Inclusivity Are Not Absolute Values

While many pundits and activists in the West see equity, diversity, and inclusion as self-evident moral truths of absolute value, closer inspection reveals that they cannot fill that role.